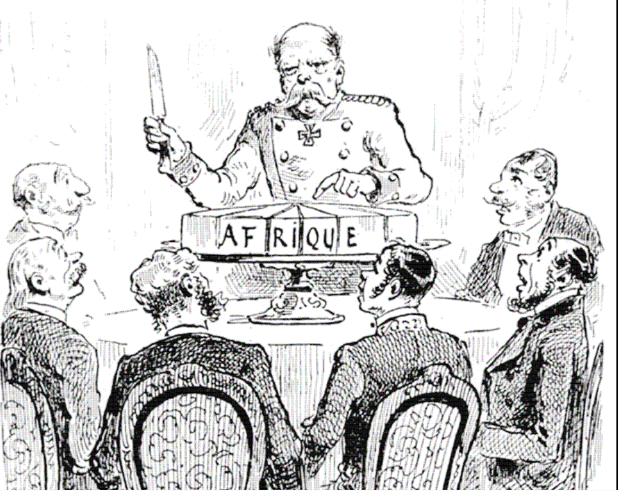 “In 1884, German chancellor Otto von Bismarck called together 14 of the major western powers of the world to negotiate questions and end confusion over the control of Africa; but not one delegate from the continent of Africa was invited!

At the time of the conference, 80% of Africa remained under traditional and local control. What ultimately resulted was a hodgepodge of geometric boundaries that divided Africa into fifty irregular countries. By the time independence returned to Africa in 1950, the realm had acquired a legacy of political fragmentation that could neither be eliminated nor made to operate satisfactorily.”

In our game, both the major European powers and African leaders will be invited to discuss the future of the African continent. Understand that we are collapsing a number of events and people into this moment in 1884-5 so that we can understand the larger processes that are at work.

For the first half of the class session, you should research:

For European states: Your strategic, economic, commercial, and cultural interests in Africa. What are you claiming, territorially, and with what purpose? How will you effectively occupy your claims (a requirement established by the meeting)? How will you deal with local peoples and states?

For African people/states: How will your respond to European territorial ambitions? With resistance? Collaboration? Something in between? Make sure that you know which European country(ies) have designs on your neck of the woods. Also understand that Europeans possess superior weapons including the Maxim gun.

History of the Berlin Conference

What is expected of you?

To meet with your country team and to diligently research the issues outlined above. Dr. Reed will collect (or you may email him) your research notes and your map at the end of class. European and African territorial claims in 1884 should be noted before considering expansion.

Otto von Bismarck (Germany) will chair the meeting. Each team should make a brief statement (2-3 minutes) stating their objectives at the meeting. All resolutions must be sponsored by a European participant and receive a majority of European votes.  As African participants will find it extremely difficult to achieve anything diplomatically, they ought to consider other ways of negotiating their objectives. The Europeans must collectively agree upon how to carve up and occupy the African continent.